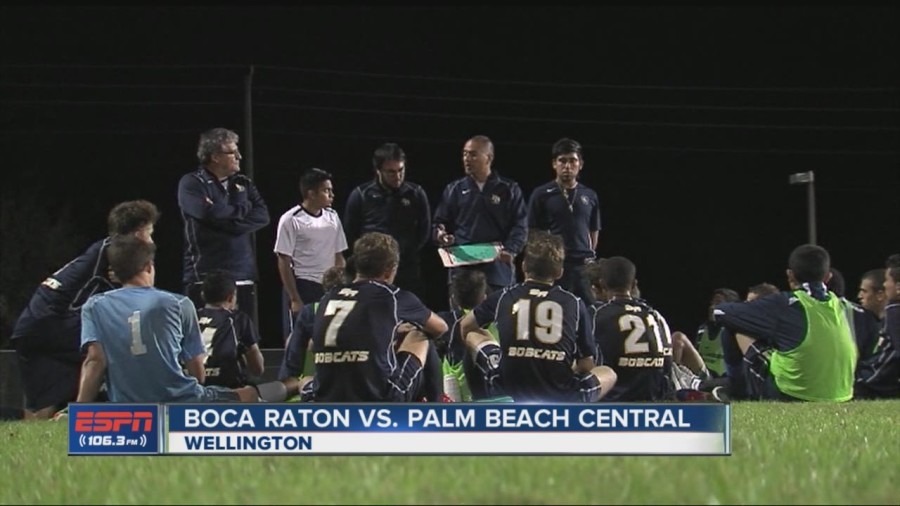 We capped of a great week of futbol, where we managed to beat the #2 seed, #3 seed, and in the District Finals, we upset the #1 ranked PB Central on route to our school’s 13 consecutive Boys Soccer District Championship.

So, going forward, we will now play this Thursday here at home vs. Monarch High School (Coconut Creek) at 7PM, please make sure you come out and support.

The team will practice all week in preparation for this game.  At our stadium at3:30PM

Boca Raton’s streak of consecutive boys soccer district championships looked like it was coming to an end.

The Bobcats entered the District 11-5A tournament as the sixth seed with an 8-8-3 record.

But Boca Raton (11-8-3) saved its best for the postseason. The Bobcats capped off a surprising run in the district tournament with a dramatic 2-1 overtime victoryFriday over top-seeded Palm Beach Central (17-3-1) to win their 13th consecutive district title.

“I’ve had so many great teams in the past,” said Boca Raton coach Marcelo Castillo, who is in his 10th season with the program. “This is the one where we had the most adversity. We battled and the results slowly came.”

It didn’t look good for the Bobcats early on, as the Broncos began the scoring on a tremendous shot off the foot of Aly Cadet. From just outside the box, Cadet sent a line drive over the outstretched hands of Bobcats goalie Collin Foody in the 16th minute.

However, Boca Raton bounced back.

The Bobcats began the rally with a goal from freshman Chris Altonen in the 42nd minute to tie the match at 1. It was enough to send the game into overtime.

From there, Boca Raton used a fortunate bounce to keep its streak of district titles alive. Junior Mark Faeth’s soft shot bounced off a Broncos player and into the net in the 88th minute during the first overtime for a golden goal.

“I honestly didn’t get much contact,” Faeth said. “The defender was pulling me back and I hit it, and the ball just took a big deflection and went into the net.”

With three starters from last year’s team that lost in the Class 5A state championship still on the roster, the Bobcats are hopeful they can make another deep playoff run.

“The last time we won the state championship, we started 5-5,” Castillo said with a smile. “But I’m just happy that we’re here.”
WPTV NEWS CHANNEL 5: