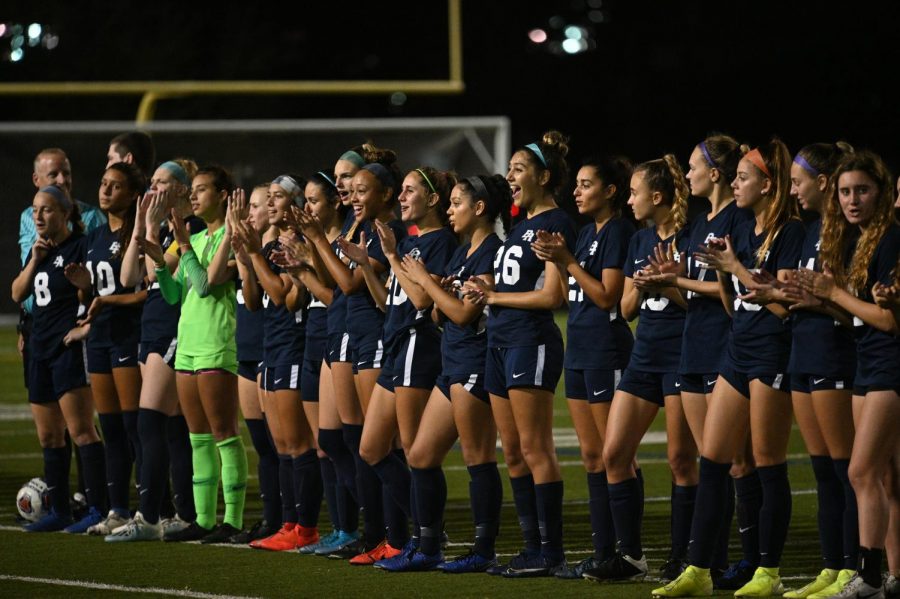 Work ethic, the culture of work and effort to be the very best. This is what characterizes the mentality and actions of the players on the girls’ and boys’ varsity soccer team.

The push to reach a level of ability that they see in their eyes as their “very best.”

“I feel like we haven’t reached our full potential yet, although we have started on a good undefeated season,” said senior Thomas Moore.

This is very similar to the attitude of the girl’s varsity team.

“After the first three games, we have only been increasingly getting better. I can’t imagine how good we will be by the end of the season.”

“I truly believe that as we get further in the season, we will peak. Once we enter playoffs and beyond because we are still getting used to each other,” said senior Sophia Ehrnst.

An aptitude of playmaking between players sets up chances for scores and ultimately wins as a result.

“We have a strength on the outsides. We like to get to the end of the line and cross it which will help us in the future because this how a majority of goals are scored,” said Larco.

Ehrnst elaborated on this outside play

“Our outside-mids, how strong they are up top and the crosses we are getting in, it’s helping us come together,” said Ehrnst.

The girls’ team started 4-0 each with a significant margin to start, showing off the talent and chemistry between the players. Their talent has created a sense of depth in the team

“I think we are very dynamic right now, where we have different strengths and weaknesses in certain areas,” said Ehrnst.

Larco pointed to the deepness of their team

“We have a very deep team, we know that whoever goes in will not mess up the rhythm,” said Larco.

The boys’ team, who also started undefeated, pointed to the experience the team has with each other and its identity which includes its offense and defense.

“We have good leadership and experience from the seniors and juniors that we have. Most of us have been playing with each other since we were 10 years old,” said senior Alejandro Pineda

Moore believes that this team is incredibly talented

“Our solid defense, our ability to score, and a brute goalie to top it off.”

“The defense is doing pretty great. We have three in the back and they’re doing amazing.”

However, with great team success can come complacency against competition which can lead to crushing losses that come from a lack of focus for many teams. But, the players are aware of this.

“I’m always demanding more from my defense especially, so, although, that we [defense] haven’t gotten a goal so early in the season there are still things in my defense that I will keep demanding from them,” said Larco.

The way of thinking that every detail will impact the overall result of a team’s success.

“We can improve with every little thing in practice,” said Ehrnst. “Everything that we do is because we do so much better together.”

Also, the sense that this is not just a sport, but a bond between players that leads to success on and off the field.

“The chemistry is getting better now. We have some new players, so, were trying to get the chemistry back and have a great season,” said Camargo

This is something the girls relate to as well

“We have been focusing on this season a lot,” said Larco. “We are not just not worried about the on-field result, but, we are focused on the relationship with each other.”

As it goes, this team can be considered very talented with chemistry that is still developing.

There is a goal in mind, the goal of reaching states and becoming champions

“I think we can go all the way,” said Ehrnst. “With everybody going to practices and really cooperating and working hard, I think we can make it to states.”

Both teams can become complete powerhouses that can be extremely productive and quite intimidating. But, the best teams have a focus on a goal in mind. How this team approaches adversity and complacency on early success will have to it show in order to win it all.

Both teams clearly have the potential to succeed this season. How they approach adversity and overcome complacency, will determine if they can win it all.