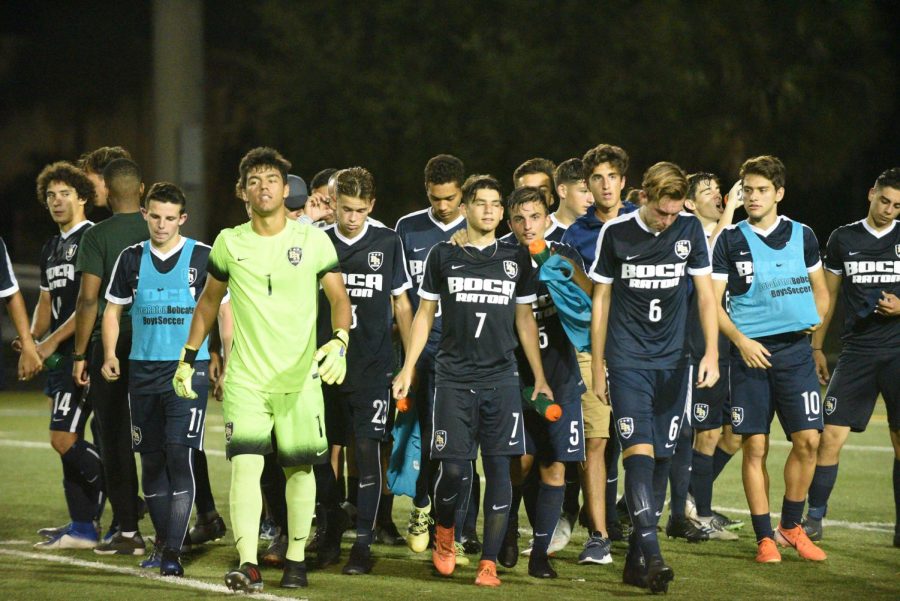 Alejandro Pineda is a senior who took on the highly important position of goalie on the varsity soccer team this year, which played a big role in the process of having a successful win.

“It’s a lot of pressure because you can’t make a mistake; if you do then it leads to a goal,” said Pineda.

The role of the goalie in the game is very important and essential for the team to have a chance at winning. The goalie is the last line of defense and needs to protect the goal, so the other team can not score.

Pineda was recognized for his leading capabilities and skills on CBS12 news, and had the opportunity to be the news platform’s athlete of the week. The report stated that being part of such a major role on a high school team that is top ranked in the country, helped the team go as far as they did in this year’s season.

Pineda had the advantage of already knowing most of his teammates before the season began, which gave him the advantage of having strong teamwork with his fellow players. They have a lot of trust in each other.

“I have been playing with most of the players since I was about 10 or 11 years old.”

Now as a senior, Pineda is figuring out what the future holds for himself, both as a soccer player and as a student.

“In college, I am leaning towards studying environmental science. I plan on playing soccer in college, but I am fine with either playing or not,” said Pineda.

Although playing soccer is a planned part of his future, Pineda also believes that he can be successful without the sport, which reveals how he is able to have multiple responsibilities for the team and himself and his future.

As one of the varsity soccer team captains and the center back of the team, senior Thomas Moore took on the responsibility of keeping everyone in check.

“I have to see what’s going on on the field and tell everyone how to position themselves and also off the field, I have to hame everyone together to make sure we’re all on one page,” said Moore

In such a leadership position, you have to be able to check in on your teammates and take control over the amount of responsibility the position requires. This creates an atmosphere for the players to always back each other up and know exactly what they need to do to stay on top of their game.

“Our best moment was when we beat Spanish River, since they beat us last year and also beating Park Vista because they knocked us out of regionals last year.”

Spanish River, being our school’s rival and who we lost to last year, is an opponent that brings out the drive to win.

“Me and Joao work well together. He is a Brazilian, so he is the link to half the team that speaks only Portuguese.”

Moore works very efficiently with Joao Negra, the other senior captain of the varsity team. Having the team being half Brazilian, their partnership can support this language barrier, since they both speak Portuguese.  This allows the team to be able to work and understand each other easily.

“Some small colleges reached out to me for soccer opportunities, but I’m trying to go to a bigger school like UF where I would plan on majoring in business,” said Moore.

Even though he is such a great player, Moore plans on pursuing another major in college, where he will be able to use his incredible leadership skills that he learned from his position on the team.

Senior Joao Negra, is a very talented player who has the honor of being a co-captain, along with Thomas Moore, while also playing center for the team.

“I play in the center, so I have my teammates who score goals and I also score goals when I get the opportunity,” said Negra.

Playing the position of center allowed Negra to be able to partake in the game through scoring and defensive play.

“I really look forward to playing college soccer, I have some friends that play college soccer and they tell me about their experiences.”

As such an amazing player for our boys’ soccer team, Negra plans on pursuing soccer seriously in his future, which would include college. Some of his friends have had the opportunity to play college soccer and informed him of their experiences and what he should look forward to in his upcoming future. As a senior, it can be very exciting to get an idea of what your life will be like after high school.

“One college in Iowa, [contacted] me saying they like the way I play.”

Having a leadership position on the team allows Negra to be noticed by colleges, which is a huge deal, especially if it is for what he loves and enjoys doing.

As co-captain, Negra has to build a friendship with the other captain to efficiently work together to benefit the team. Moore and Negra do this by being close friends with each other, which allows them to build a tight bond as captains and teammates.

“Besides soccer, I like to be with my family, with my mom and my friends which is what I do in my freetime.”

Negra is a great teammate and is always there to support the boys on the team, but he

also takes some time to himself with his family and close friends. This reflects his passion for what he does and for the people who support him.

Negra will go a long way and be very successful as a player and as a person.