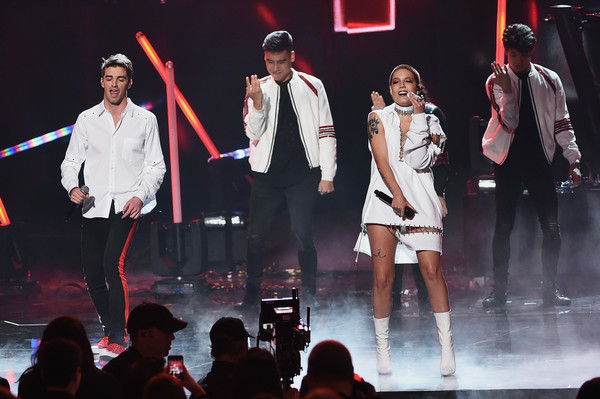 You may not realize it, but stars would be nothing without their choreographers. The reason award shows and performances are filled with enthusiasm and energy is thanks to the dancers. Without the backup dancers building the atmosphere and their outstanding visuals, there would just be one person or group on stage singing their hearts out. Although that scenario doesn’t sound too bad, media’s standards and no single artist would be able to stand out. It’s because of this, that I am grateful for creative directors and choreographers for bringing their visions of the music to life. Some of these choreographers are already well known in the dance industry, but at awards shows their pieces are filled with their trademark moves. For those whom aren’t dancers, these hints go unnoticed but for choreoheads it has their favorite visionaries name written all over.

Take Britney Spears’ iconic VMAS performance of “Slave for U” also known as “the one with the snake.” Andres Fuentes, Spears’ main choreographer, was responsible for the diva’s groundbreaking routine. Unfortunately, he passed away recently at only forty years old, but his work and legacy (“Womanizer,” “Crazy,” and “Sometimes”) continue to be celebrated in pop culture. Current London X-Factor choreographer Brian Friedman also crafted a perfectly synchronized number for Spears in her “Overprotected Remix” music video.

One of my personal favorites was Disney’s collaboration with hip hop mogul Chris Scott. Scott choreographed all of the Teen Beach Movie routines in the first and second film assisted by Kent Boyd and Jessica Lee Keller, whom also played characters in the film. Scott’s genius lies in being able to emulate the song’s lyrics into movement. He embodies an entire era with his choreography for “Cruisin’ for a Bruisin” and “Like Me” in the first movie. In the second film, he creates a genre of his own as he mixes modern steps and styles, such as breakdancing with footwork from the 50s. Disney has also given the go ahead for choreographers to produce their own short films. Scott worked with dance prodigy, Kaycee Rice and Step Up actor, Adam Sevani in the ten minute Halloween special, How To Catch a Ghost. Kent Boyd also aided his creative genius to the major corporation by acting, directing, and producing a series known as Free Period.