Teen Vaping: How it Impacts our Health 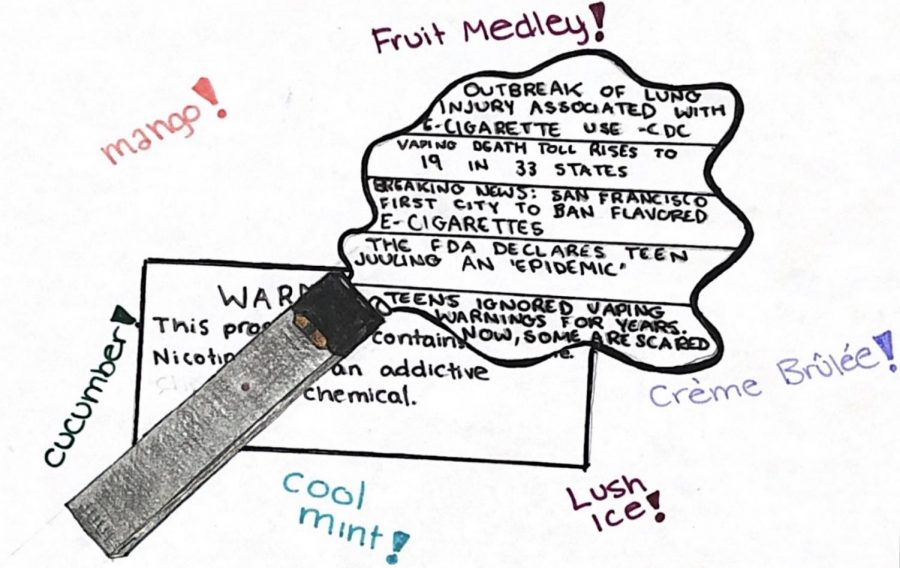 In the past few years, flavored electronic cigarettes, also known as vapes, have been rapidly increasing in popularity since 2017 initiating a new trend in high schools throughout the country. The FDA reports that in 2017, 11.7% of high school students reported using some form of electronic cigarettes in the past 30 days. In 2018, the same study had shown a 78% increase, as 20.8% of students surveyed reported the same thing. By the end of 2018 multiple national health agencies declared teen vaping an epidemic. Since then, the number has continued to rise at an alarming rate. What many of us fail to understand is the depth and complexity of how electronic cigarette usage could affect us in the long term.

There are many reasons why electronic cigarettes are so appealing to adolescents. The first and most problematic is the fact that they come in hundreds of flavors ranging between minty, fruity, and some that even taste like baked goods. Many critics have even claimed that a majority of prominent e-cigarette companies such as Juul Labs, Inc. and Suorin USA are marketing their products in such a way that is particularly alluring to youth.

One of the biggest issues of e-cigarettes is what is hidden behind the tasty flavors: high levels of nicotine, which is one of the most addictive substances in the world. It is easy for anyone to quickly become dependent on the substance, especially adolescents with developing brains.

Aside from the addiction component, nicotine can have numerous additional consequences and effects on the brain, body, and overall health. In the brain, nicotine can disrupt brain neurotransmitters and receptors which carry messages to your organ system related to breathing, heart rate, memory and more. In the body, nicotine can cause increased heart rate and increased blood pressure. It can also narrow and harden arteries, disrupt blood flow to the heart, which can potentially lead to a heart attack. Finally, nicotine addiction can significantly reduce your appetite which results in unnecessary and unwanted weight loss.

Many e-cigarette companies have advertised their products as a healthier alternative to cigarettes, however, since vaping is a relatively new concept, it has not been thoroughly researched and studied by doctors and scientists, meaning that the short-term and long-term effects of e-cigarette usage are generally unknown.

Long before the health problems related to cigarette usage were fully understood, there was a time in which people thought cigarettes were harmless. Many advertisements for popular cigarette brands featured positive recommendations from doctors, dentists, and surgeons. The availability of research on the subject was limited. It wasn’t until more research proving the extreme damage of cigarette smoking was released during the 1950’s and 60’s that people began to fear the repercussions of smoking.

It is safe to say that the same scenario could very likely happen with electronic cigarette usage.

While the future of e-cigarette usage remains a mystery, high school students understand that e-cigarettes are dangerous to our physical and mental health. The choice we need to make affects our future; do we take the risk and continue to buy and use these products or do we quit before too much damage is done? It is not too late for us or anyone who has fallen into the trap of nicotine addiction to change our lives. There are many resources available to those who are ready to take the step towards quitting. Talk to a friend, a parent, or any trusted adult. If you do not feel comfortable, go online and research information about ways to quit smoking. It is important for teenagers as a whole to significantly decrease the number of smoking in high schools again.